Foribale is a salutation given directly to the orishas or to an Iworo who has "made Ocha" (been initiated into the priesthood). This salute can be made by anyone who has received their ilekes or necklaces (collares in Spanish). The word Foribale literally means "to place the head to the ground". This refers to the act of prostrating before the orisha, also referred to as "throwing oneself" or "the salute of the santero". Iworos (santeros) are saluted this way as well because they have have been through the rite of "kariosha" (putting the orisha to the head). In this way the person is saluting the orisha put to the Iworo's head and not the human being. It is an act of respect to the orisha and should always be done whenever the person goes before the orishas (or a santero during a ceremony). During this salute the Iworo will give the blessing of the orishas to the person saluting them.

Whenever there is a ceremony the ilekes initiate should salute the orishas first. This should never be done in the absence of an Iworo as it is a santero that must lift them from the ground after blessing them. After saluting the orisha the ilekes initiate will then "throw themselves" to the person who blessed them while they were in front of the orishas. Afterwards they will salute their godparents in this way, followed by saluting all the priests present in order of seniority in the religion (a twelve year old will sometimes have ten years "in Ocha"). Younger Santeros will also salute all their elders in the same way, again starting with their godparents who gave birth to them in the religion.

After the ilekes initiate has paid foribale and has been blessed and "picked up" they will rise and salute the Iworo by crossing their arms across their chest and approach the Iworo saying "bendición" or "aché". They then lean to the left then the right, touching shoulders with the priest. After they have saluted the santeros they may then salute each other by doing the crossed arm salute, without saying "aché" or "bendición" as they aren't priests yet.

Saluting a Babalawo or "Father of the Secrets" is a special case. They are saluted by leaning over and touching the ground with the tips of the fingers of their right hands while saying "Iború, Iboya, Iboshishé".

Another special case is a priest of Ochossi, who salutes his or her elders by bending at the knee, the right hand coming across the chest the other behind the back, with the head bowed. This salute shows the world that they are the child of the great hunter Ochossi, as this salute is somehow reminiscent of a kneeling hunter. 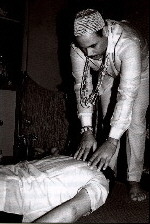 A child of a male orisha salutes an elder